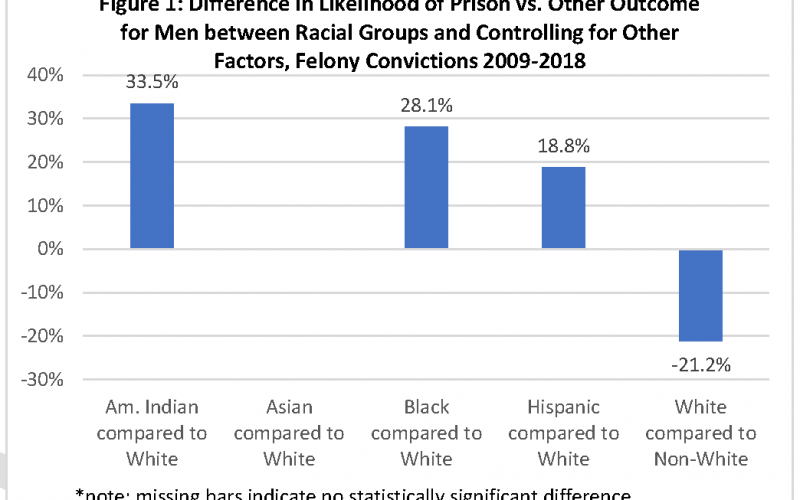 Columnist Daniel Bice of the Milwaukee Journal Sentinel broke the news last week that Wisconsin Supreme Court Chief Justice Patience Roggensack has been sitting on a year-old study that showed a clear pattern of racial disparity in Wisconsin prison sentences. Specifically, the study shows substantial racial differences in the likelihood of being sent to prison, although little difference in sentence length among those sentenced to prison. She was asked to produce the study after claiming in emails last summer that a study had proven the absence of any racial bias in Wisconsin courts. Bice asked me to review the study and what it said and I’m quoted in his article. You will see that the study is labeled “draft” presumably because Justice Roggensack did not want it released, even though it was an official study conducted by Michael F. Thompson, director of the Office of Research and Justice Statistics for the courts. The report’s author may have wanted also to obtain some peer review and have the opportunity to double-check everything before final release, or provide additional documentation of the methods in the appendix. For example, the report says that a variety of alternate specifications of the statistical models were checked, but the draft does not include these details, just the main models. The figure summarizes the overall finding: compared to White men, Black men were 28.1% more likely to draw a prison sentence, Native men 33.5% more likely, and Hispanic men 18.8% more likely. Or, looking the other way, White men were 21.2% less likely to draw a prison sentence than non-White men. The study also finds that racial differences for women are generally much smaller.

The study uses the standard multivariate statistical regression approach to make sure that racial differences are not due to things people think should affect sentencing, like the seriousness of the offense or prior record. It provides strong prima facie evidence of racial differences in sentencing. The main finding of this research is basically the same as that of the 2007 Sentencing Commission Study. The executive summary of that study written by political appointees downplayed its findings and called them inconclusive, but if you read the results in the statistical appendix, they are similar in to the current study, although the statistical details of the modeling differ. Truly, any person competent to read the statistics will draw the conclusion that there is clear evidence of a pattern of racial difference in sentencing across Wisconsin.

The study does NOT say that every judge in every case was racially biased. What is says is that, on average, across many decisions, there were larger racial differences after controls for relevant factors than you would expect to see by chance. Further more detailed research could pin down exactly how or why this difference is appearing and whether specific courts vary in the degree of racial difference. For example, the study showed much smaller racial difference in Milwaukee county than in the rest of the state. It also seems to show that the size of racial difference may differ among offense groups. Most likely, specific courts vary in which offenses and which racial groups show the most difference. This is what statisticians call interaction effects, which are not included in this report. Each time you try to get more specific and detailed, you risk not having enough cases for statistical significance, but much more detailed analyses are needed to help pinpoint how and where to address disparities.

The study is not the end of the conversation. It does not tell us what to do about this. It instead should be the beginning of a conversation about where and how these differences are arising. The next step is more detailed information that can guide interventions. The vast majority of cases (97% in this sample) are resolved by plea bargains, not by trials. This means that prosecutors and defense attorneys play key roles, not just judges. Some research in other places has found more racial difference in the plea bargaining process than in trials. A recently-published study of Dane County plea bargaining 2000-2006 found that White defendants more often than Black defendants had all charges that might draw incarceration dismissed or amended to charges that would not draw incarceration. This pattern was strongest for misdemeanors and lesser felonies (those that would draw no more than five years in prison) and weak for more serious felonies.