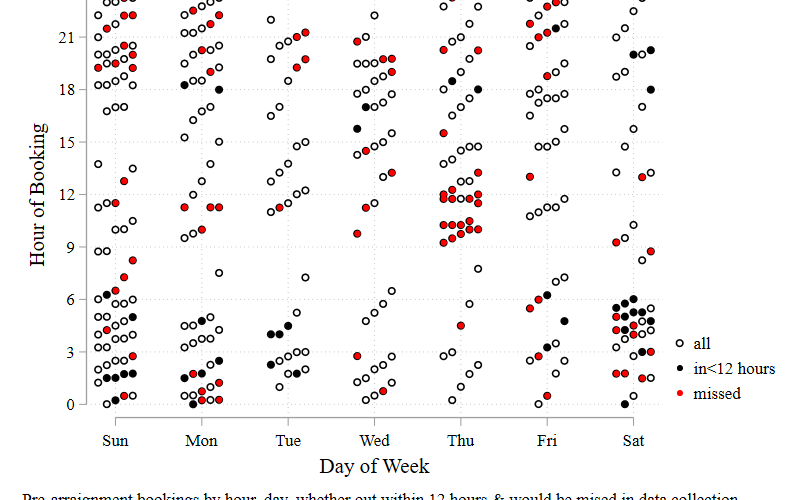 Local activist groups such as Madison’s MOSES are concerned about reducing the number of people in jail. As part of this effort, activists use technology to automate the collection of public data to monitor local authorities. Eric Howland has been collecting data on the people in the Dane County (Wisconsin) jail since the fall of 2019. After experimenting with the timing of the collection, he began in December to collect data twice-daily, at 6:30 am and 6:30 pm. This report finds that this methodology fails to capture about 16% of all people booked into the Dane County Jail, about 30% of the people who are booked into the jail pre-arraignment, and about two-thirds of those who exit the jail within 12 hours (most of whom exit within three hours). These would primarily be people who can pay bail from the bail schedule. There is also scattering of other short spells in the jail that are missing in our data collection practices. This is a significant shortcoming in using our data to study possible discriminatory practices in the jail.

Method: Eric Howland has been scraping the Dane County (Wisconsin) jail web site twice a day, at 6:30 am and pm, to get the name and status of everyone in the jail. To see how many people are being missed by this methodology, the list of people booked into the jail was scraped every 15 minutes beginning at midnight on February 21 until 5 pm on May 9. People who were booked into the jail but exited again before they would have been captured at 6:30 am or pm are those who would be “missing” from our regular data collection. Some of these “missing” records are for people who have more than one record as they move through different statuses and would have been captured as being in the jail from a later record, but 94 of the 592 individuals, 16%, who were booked into the jail between February 22 and March 9 were not captured in our twice a day data collection. Of these, 75% are pre-arraignment records, 8% are pre-trial records, 7% “other” and 6% sentenced. These people who come and go quickly add little to the daily counts of people in jail, but they are important for understanding possible sources of disparity in treatment of people.

The figure shows pre-arraignment bookings by the day and hour of the jail entry. The empty circles are people who stayed in the jail 12 hours or more. The black circles are people who stayed in the jail less than 12 hours but who were in jail at 6:30 am or pm and so captured in the data. The red circles are people who were in jail less than 12 hours and left the jail before our 6:30 am/pm collection would have caught them. The horizontal movement within days is just a way to allow all the dots to be displayed. Our usual data collection missed 30% of all pre-arraignment bookings and 2/3 of the bookings in which the person got out within 12 hours. People who entered jail pre-arraignment late on Sunday or Friday night, or at midday on Thursday, were especially likely to be missed in our data collection.

Figure 1. Pre-arraignment bookings February 22-March 9 by day of week and hour of booking; color codes indicate people who left jail within 12 hours and, of those, people who would not have been captured in our 6:30 am/pm data collection strategy. As research shows that even fairly short stays in jail can have negative consequences for jobs and families, our loss of data on very short spells in jail is an issue for using our data for studying this process. Studies of racial or other disparities in jail incarceration need to track the people who are able to bail out quickly as part of understanding what factors affect who ends up spending more time in jail.

This does not make our twice-daily data collection irrelevant. We still have richer data to work with than some of the consultant reports. But we need to acknowledge the limitations as well as the strengths of the data we have collected.

The broader lesson for activists collecting data to monitor public authorities is to consider performing methodological tests such as this one to better understand the data collected and to consider possible modifications in data collection.