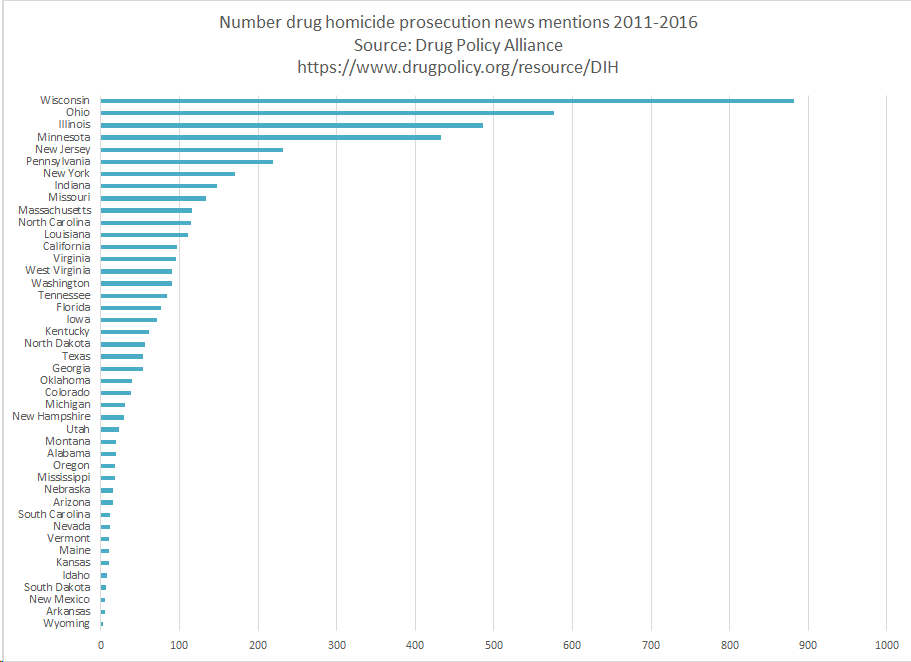 Wisconsin leads the nation in filing homicide charges when someone dies from an overdose of an illegal drug, according to the Drug Policy Alliance, whose researchers found 882 news mentions of drug homicide prosecutions in Wisconsin 2011-16.  (Second highest was Ohio with 577; Illinois had 486 and Minnesota 433.)  Although the justifications for these prosecutions is a desire to punish the “drug kingpins” who make money on other people’s addictions and, thereby, deter drug sales, that is not what these prosecutions do.

Most people charged with homicide under these laws are not high-level drug dealers but the person who last touched the drug before the deceased, usually a friend or relative who was also using the drug. These laws cause deaths, because fear of prosecution makes people unwilling to call 911 and get medical help when there has been an overdose. Many people do not know that “delivering” an illegal drug is defined to including handing it to someone else, even if no money changes hands. If you ask me to hold an illegal drug for you for a while and then I give it back to you, we are both guilty of “delivering” an illegal substance. Even when money changes hands, the person who sells the drug to the user is generally a low-level dealer or, often, a user who buys and resells drugs to support their own addiction. Because the laws allow anyone involved in handling a drug that led to a death to be charged, the decision about whom to charge can be arbitrary. It is rare for prosecutors or police to even try to trace the source of a drug overdose back to a high-level dealer and more likely that they will charge whomever they find at the scene.

An investigative report earlier this year by  FOX6 news in Milwaukee  in February 2017 reported that they had built a database of more than 500 drug homicide cases filed since 2000. There have been more than 10,000 drug overdose deaths in Wisconsin in that period. Of the 100 most recent cases in Wisconsin, reporters  Bryan Polcyn  and  Stephen Davis found that only 11 were higher-level dealers, defined as at least one step removed from the victim. Sometimes a lower-level dealer is charged in the hopes of gaining information about the higher-up network, but most often the low-level dealer knows suppliers only by nicknames and the higher-level dealers successfully protect their identities.

One example was Samantha Molkenthen, a heroin addict who in 2016 received a prison sentence of 9 years plus six years extended supervision for first degree reckless homicide in the death of her friend and fellow user Dale Bjorklund in Jefferson County. Samantha and Dale were part of a group of friends who regularly bought and shared heroin together. Samantha herself overdosed in 2014 but survived; two other members of the group died shortly after Dale. The judge who imposed the sentence said that Samantha was at the “lower end” of heroin delivers, but that he wanted to make an example of her. Even though the supposed goal of charging low-level dealers with homicide is to “flip” them to identify higher-level dealers, Samantha had no information to give, so she was imprisoned.

Prosecutors quoted in the 2017 FOX6 story and  a prior November 2016 story about Samantha and the broader issue  argued that these prosecutions are valuable for sending a message even when they target people who are not drug dealers in any meaningful sense of the word.

But what message is sent? Thirty years of punitive drug laws have taught us that punitive crackdowns on drug dealers do little to nothing to deter illegal drug use. Instead the punitive approach wastes large sums of money that could be spent on more effective approaches, including treatment for addiction and underlying traumas that often contribute to drug abuse. In the meantime, deaths from drug overdoses go up when users are afraid to call 911 for fear of criminal charges. These homicide charges make it appear that prosecutors are “doing something” about heroin overdoses, but the evidence is that they are a bad practice that does much harm and creates no good.

Wisconsin, like many other states, first passed a “Len Bias law” in 1987 allowing for a second-degree murder charge for causing death through delivery of an illegal drug, but the law was not used much in Wisconsin until after 2000. The law has been amended several times, most recently in 2017. The current statute is 940.02(2)(a), (b) . It defines “reckless homicide” as a Class C felony  with two elements: (a) causing the death of another human being by manufacture or delivery (in violation of 961.41) of a controlled substance listed in 961 if another human being uses the controlled substance and dies as a result (b) administering or assisting in administering a controlled substance without lawful authority to do so to another human and that human being dies as a result. The footnotes state that anybody involved in handling the drug can be charged and that the decedent’s own actions in contributing to the death to not eliminate culpability.

The Drug Policy Alliance has produced a teleconference that gives more information about this issue. Listen to the teleconference.