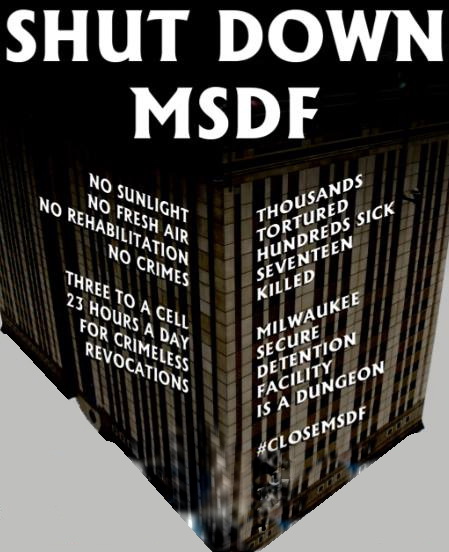 Activists in Wisconsin’s Close MSDF coalition  are focusing attention on the inhumane conditions in the Milwaukee Secure Detention Facility (MSDF) and the problem of crimeless revocations that send people there.  The MSDF was built in 2001 to house people temporarily who had been accused of violating the terms of their probation or parole because these holds had created problems of overcrowding in the Milwaukee jail. The MSDF functions like a jail in that it accepts offenders 24 hours a day and has an intake/booking process like a jail. But within a few months of its opening in 2001, the MSDF expanded its mission also to include people on Alternatives to Revocation, a short-term period of incarceration that is officially not a revocation, and to include prison inmates who are scheduled to be released to Milwaukee within a year. It also holds prison inmates who are sent to MSDF from other prisons for Temporary Lockup status*.

MSDF was built to hold 460 inmates and now houses roughly 1440 people. Two and even three people are housed in small cells originally designed for one person by replacing a bed with a bunkbed and adding as a third bed a “boat,” a plastic tub stored under the bunk bed during the day. When the “boat” is in use, people must crawl over each other to get to the toilet and one person’s head is three feet from the toilet. People are confined in their cells for 22-23 hours a day in spaces with no sunlight, no fresh air, poor ventilation and no air conditioning. They are allowed no in-person visitors (video conferences only), and there is no rehabilitative programming. There is no outdoor exercise area. People housed in the facility never see daylight while they are there. The very conditions of confinement tend to create depression and exacerbate mental illness, and the lack of outside air or significant exercise promotes poor physical health, as well. In addition, there have been news reports of staff mistreatment of inmates, including mistreatment of mentally ill people and failure to respond to medical emergencies. Seventeen people have died in the facility since 2001.

Although MSDF is classified as a medium security facility, the conditions of incarceration are close to those of a supermax facility. The conditions are inhumane even for short stays of a few days. People on community supervision holds or Alternative to Revocation are supposed to be confined for no more than 90 days, but many people spend even more time there through, either as “regular” inmates, or due to the intricacies of the rules and procedures governing revocation appeals.

The Close MSDF coalition web site contains the text of many testimonies from people who have been housed in MSDF, as well as other information about the facility and the campaign.

Here is a short video explaining the issue. It includes testimony from several people incarcerated in the facility.

Someone who fails to follow the conditions of supervision can be punished with [re-]incarceration.  “Revocation” occurs when a person on community supervision is sent to prison for violating the terms of supervision. When a person is revoked, they are officially going to prison to serve the original prison sentence the judge gave them (in the case of a probation revocation) or the balance of the prison sentence (in the case of a parole of probation revocation). In Wisconsin, people may be also incarcerated as an “Alternative to Revocation” that “officially” is not a revocation. These “Alternatives” are short periods of incarceration, typically a few months, that in the Milwaukee area are served in the MSDF.

A probation or parole (or extended supervision) “hold” happens when a person is taken into custody and incarcerated while their PO investigates to determine whether they should be revoked. In most counties (including Dane) this incarceration is in the county jail. In Milwaukee, it is in the MSDF. People who are on community supervision and charged with a new crime are almost inevitably given a “hold” and considered for revocation, even if that crime would not normally result in a prison sentence. In  practice, this means that someone on community supervision usually has no right to pre-trial bail when they are accused of a new crime and will sit in custody while the new charge is adjudicated. It is also common for people to be revoked to prison when accused of a new crime, whether or not they are ultimately found guilty and whether or not that new crime would normally draw a prison sentence.

In addition to holds based on arrests for new crimes, people are frequently taken into custody on a “hold” for alleged non-criminal violations of the conditions of supervision. People are incarcerated on a “hold” while the PO determines whether the violation actually occurred and determines whether it is appropriate to initiate a revocation hearing. The “hold” itself may also be used as a sanction by the PO to discipline the offender into compliance with the rules of supervision. Depending on the conditions of supervision, these violations may include failing a drug test, imbibing alcohol, getting a traffic ticket or driving without a license, becoming homeless, losing a job, having a GPS monitor alarm go off, taking a trip without the PO’s permission, missing an appointment with the PO or other mandated counselor, going to a part of town where they are not supposed to go or being in the presence of known criminals, and a host of other factors. The GPS monitoring is a particular problem because the devices often malfunction*** and either lose signal entirely or report a false location.

The length of a “hold” generally ranges from a few days to the 90 days limit for a contested revocation process and can in some cases go much longer.

Understanding the intricacies of how people can end up in prison is important for understanding the dynamics of mass incarceration. More and more people are housed in jails, where stays are shorter (often as short as overnight). Conditions are generally worse in jails than prisons, because the belief is that people housed for short periods do not need fresh air, decent cell sizes, exercise, and rehabilitation that are considered humane treatment for those incarcerated for long periods. In practice, many people spend months or even years in jail often without having been convicted of a crime, as they await trial. The Milwaukee Secure Detention Facility was originally built as a type of jail, specifically for people placed on probation/parole holds, but quickly evolved into a general facility for people incarcerated for shorter time periods in the Milwaukee area. In addition, its use as a TLU (solitary confinement) facility suggests that it is the site of even more inhumane treatment. Solitary confinement that lasts more than a couple of days is considered to be a form of torture by international standards, but longer-term solitary confinement is a norm in US prisons.

* Temporary Lockup (TLU) is a euphemism for solitary confinement. See Wisconsin Administrative Code http://docs.legis.wisconsin.gov/code/register/2000/535b/insert/doc33.pdf (page 28, DOC 303.11). TLU is to be limited to 21 days but can be extended for another 21 days “for cause.” Stated reasons for TLU are that if the inmates remains in the general population: (a) the inmate may intimidate a witness in an investigation; (b) the inmate may seek to “encourage other inmates by example, expressly, or by their presence, to defy staff authority and thereby erode staff’s ability to control a particular situation”; (c) there is a substantial danger to the physical safety of the inmate or others; (d) there is a substantial danger of escape; (e) a disciplinary investigation will be inhibited. The code requires review of TLU status every seven days.

** Here are links to the official documents: (1) “Standard Rules of Community Supervision” (2) the DOC “Offender Handbook”  and (3) The Manual for Probation and Parole officers.

*** I was present once while an offender’s GPS monitor alarm went off in front of a court official while he was at a public hearing on incarceration issues. The court official buttonholed an official  from DOC who was also at the hearing and said: “I witnessed this monitor malfunctioning.” The DOC official said: “That is not supposed to  happen. We will look into it.”  I have heard a number of ex-offenders complain about their GPS monitors giving false readings about where they are, leading to arrest, or losing signal and forcing them to leave jobs and report in to avoid being arrested. Here are some links to stories from California and Massachusetts about malfunctioning GPS monitors.