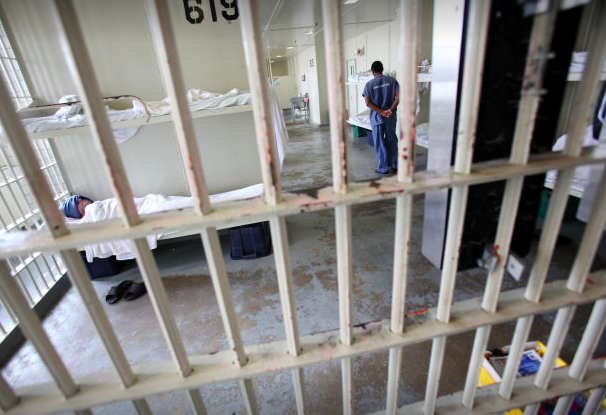 Police use of force has recently stirred widespread public interest and concern. Recent use of force incidents have been well-publicized on social media due to the ability of the public to witness and video record police actions. However, owing to the fact that the operations of jails and prisons are hidden from public view, little is known about use of force in jails and prisons, particularly about uses of less than lethal force that do not generate attention.

I was shown an equipment room that had a row of gas masks hanging up in it. I was informed they were for staff to wear when they “fogged” inmates. “Fogging” is a type of pepper spray delivery method. The active agents in pepper spray are derived from hot peppers, and pepper spray: “inflames the tissues. It burns the eyes, the throat, the skin. It frequently causes temporary blindness as the eyes dilate. It makes breathing difficult… Depending on how much you are hit with, it lasts at least 30 to 45 minutes, sometimes as much as four hours…. It makes the skin—people describe it as it feels like your skin is burning off” (Coleman v. Brown).

I recently spoke to Sheriff Mahoney, the Dane County sheriff, to find out more about use of pepper spray in the jail system. He informed me that it is used a couple of times a year, and less than once a month, perhaps indicating that it is used approximately 2-6 times a year. However, he stated that frequency of use is dependent on the conduct of inmates is in the jail, which fluctuates over time. It is usually used against inmates in maximum security, however staff have the equipment available to use in medium security too.

It may be used in situations where there is a physical confrontation, or in situations where the inmate may have “barricaded” themselves in their cell. Sheriff Mahoney cited examples such as if staff need to move an inmate who has either put their mattress up against their cell door or crawled under their bed. In accordance with Wisconsin State statutes (Department of Corrections, chapter 306.09) staff may use “incapacitating agents” against inmates, defined as any “agent or device commercially manufactured and approved by the department for the purpose of temporary control of an inmate or area”.  The statute allows for a wide interpretation of when such force may be used:

“Staff may use incapacitating agents in any of the following situations:

(a) To prevent death or bodily injury to oneself or another.

(c) To prevent escape or apprehend an escapee.

(d) To change the location of an inmate.

(e) To control a disruptive inmate.

(g) To enforce a departmental rule, policy or procedure or an order of a staff member.”

The Sheriff advised me that if they believe that “fogging” an inmate is necessary, an “entry team” dressed in protective clothing, and wearing a helmet and gas mask, will enter the area to do the deployment. Human Rights Watch described a similar scenario in the class action case Coleman v. Brown (2014): “a cell extraction team assembled… wearing gas masks, suited head to toe in biohazard suits, and armed with handcuffs, leg irons, batons, a full-length plastic body shield, and fire-extinguisher-sized canisters of pepper spray.”

Research is needed on the prevalence of “fogging” and other forms of pepper spraying, as well as other types of less then lethal force, in both jails and prisons. Numerous questions need to be explored. For example, how common is this nationally? Is this more likely to occur in jails or prisons? Is this force being disproportionately used against people with mental illness? The public deserves to be better informed about the types of uses of force that occur beyond the public gaze.

Emma Frankham is a Sociology PhD student at UW-Madison. Comments or queries about this blog post are welcome below, or at frankham@wisc.edu.

Human Rights Watch (2015) Callous and Cruel: Use of Force against Inmates with Mental Disabilities in US Jails and Prisons https://www.hrw.org/report/2015/05/12/callous-and-cruel/use-force-against-inmates-mental-disabilities-us-jails-and