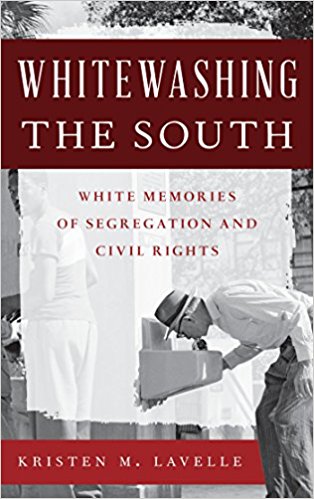 The past is always with us. How we talk about our personal biography and how we talk about our city’s or nation’s history are part of how we function today. Kristen Lavelle’s Whitewashing the South: White Memories of Segregation and Civil Rights is based on interviews with older 44 White residents of Greensboro, North Carolina about their memories of the past. They were selected as “ordinary” people who were not activists or leaders in either the Civil Rights Movement or White supremacist groups. Lavelle says: “Memory is a contemporary process of selecting and interpreting the past.” She writes about how people talk about the past and their place in the past as they construct their images of themselves and their society today. The book proceeds chronologically, first with people’s memories of growing up in segregation, then with their experiences during the Civil Rights era, then with their views on contemporary issues.

Her interviewees generally expressed positive feelings about the dismantling of segregation but also talked about the past in ways that blurred or downplayed just how oppressive the system was for Black people and emphasized their own feelings of victimization or fear during the Civil Rights movement. Most had experienced what they perceived as warm positive relations with family servants and felt they had been raised to treat people as equals without questioning the hierarchies that made some people servants. They generally described the public rules about segregation in episodic terms as occasional bad incidents, not as a whole system of subordination. The way things were was just what was, and they had no perception of White actors as maintaining the system.

They described the Civil Rights era in terms of its disruptions and difficulties for themselves and their children, with only a few interviewees remarking on the difficulties Black activists or integrating children might have experienced. Their contemporary ideas generally embodied what is called the color-blind ideology, in which they expressed support for equality without regard to race, attributed ongoing racial hierarchies to problems with Black dysfunction, and saw anti-White discrimination as a problem. Lavelle reminds us that polls in the 1960s similarly revealed a majority of Whites saying Black people had equal opportunity. Most had little awareness of or interest in the 1960 Greensboro sit-in as a watershed Civil Rights event and were puzzled by its commemoration in a museum and tourism. There was a 2004 Truth and Reconciliation process around the 1979 “Greensboro massacre” in which there was police complicity in members of the KKK shooting and killing Communists and others who were marching against the KKK in a Black neighborhood. Most of the interviewees had negative feelings about this process, as well, feeling that no good would come from rehashing past unpleasantness.

Lavelle advances the concept of “White protectionism” in which people work to portray themselves and their families in a positive light as moral actors even in the face of obvious hierarchies. She highlights the contradictions people exhibit as they talk about the past, for example the common experience of both saying at one point in the interview that one’s parents were never racist and taught them human equality and then later in the interview giving an example of an overtly racist statement by the parent. She emphasizes the ways their remembered perceptions are different from those of Blacks or those they could have had, given what was going on around them.

As I am just barely old enough to have met Lavelle’s age criterion for inclusion, although I grew up in California, not the South, I have some sympathy for people’s fuzzy and contradictory memories of a racial past, even as my research and teaching have led me to construct a racial biography for myself that highlights segregation and conflict. I grew up in a city that was overtly keeping Black people out and knew it, because it was talked about (critically) in my family, but we still lived there and I took that for granted. I saw Black people when I was young when we attended church back in my parents’ home neighborhood that had undergone racial transition, but never had any real relationship with Black people until college. I remember the 1965 Watt’s riot from the White standpoint: we could see the flames that were about 8 miles from my house (I checked this distance as an adult);  my White grandparents and great Aunt, who were living in the riot area at the time, got out of the area and stayed elsewhere on the advice of their Black neighbors; and I watched hours of television with the KTLA helicoptor flying over the riot area. I know I had no political understanding of this event when I was 15, even as the vividness of my personal memories informs my understanding of racial politics today. I know that my initial response to Martin Luther King’s death failed to acknowledge its importance, even though I was enrolled in a Black literature class at the time, because I remember being puzzled about why a friend called it a “bad day” and why the campus had canceled that night’s movie. My own parents embodied exactly the combination Lavelle describes of belief in human equality, critical awareness of inequality (they talked to me about Southern racism as well as criticizing the fact that the mayor kept winning by passing the word “he kept the Blacks out of Torrance”), internalization of anti-Blackness despite their basically egalitarian ideologies, and cluelessness about the world they grew up in. The Black people who lived near them in the 1930s and 1940s were actually affluent; there was a segregated wealthy Black area near their not-affluent White neighborhood. My mother always saw this as a sign that Black people preferred to be separated from Whites and that residential segregation was a mutual choice. She could never absorb the idea that rich Black people had not voluntarily located their neighborhood near low income Whites.  I know that I am making what Lavelle would call White protectionist moves as I construct my own racial biography and locate myself in history. I would like to think that I am also aware of and challenging White supremacy as I do so, but I feel confident that if I talked long enough, Lavelle would spot elements of the White racial frame in my construction of the world, no matter how much work I do to reflect critically on my experiences and the world around me.

It is all too easy for young people to criticize older people for their momentary revelations of a White racial frame and to be unaware of their own blinders and distorted perceptions about their own world.

I recommend reading this book not as an exercise in telling yourself how narrow-minded Southern Whites were or are, but as a tool for interrogating your own racial biography. How would you describe the racial structure you grew up in? How do you remember what your parents taught you about race? How do you position yourself now in racial structures? If you are White, do you notice White protectionism in the stories you tell about yourself and yours?

Race, Politics, Justice > Talking and teaching about race > Whitewashing the South (and elsewhere)