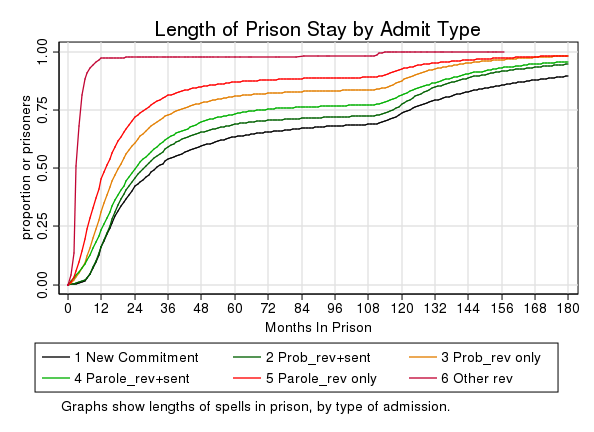 It is important to understand how long people stay in prison as part of understanding revocations. The graph below shows how long people stay in prison across all admission types.  The vertical axis shows the cumulative percentage who have exited after the number of months on the horizontal axis. So, for example, about 75% of all people got out of prison within 48 months of entering. You’ll see a little bump at 120 months, i.e. 10 years, which I assume is because judges tend to give 10 year sentences more than 9 year sentences.

It is important to break this down by type of prison admission, as in the graph below. The black line at the bottom is new commitments to prison, i.e. people who have newly committed a crime and gotten a prison sentence. A little over half of them are out by 36 months (3 years), which generally means they got a relatively short sentence for a less serious crime. At the other end, about 12% are still in prison after 14 years (168 months); these are usually people with long sentences for very serious crimes. The dark red line at the top as the category “other revocation” which is some sort of shock revocation that rarely lasts longer than 12 months.  The other categories are probation and parole revocations with and without new sentences. People revoked with new sentences (the green lines) spend longer in prison than those revoked with no new sentences (the orange lines).

If we look only at spells after the first spell (i.e. people who have been in prison and gotten out again), the large majority are out of prison again within three years, and the gap between new convictions and revocations is much smaller, with over 70% of new convictions out within three years. These are the people who are “churning” in and out of prison for relatively non-serious offenses that draw short sentences.

If we look only at people’s first spell in prison, the patterns are different. In theory, the first spell in prison should be only a new conviction, a probation revocation, or perhaps the “other” revocation. Parole revocations showing up as a first spell record decline over time through 2006 and are probably due to data limitations, so for first spells it makes the most sense to look only at the categories that should be there for a first spell, First spell in prison are longer on average, but even for first convictions, 50% of prisoners are out within three years and 70% are out within 10 years; about 12 percent are still in prison 15 years later. Those still in after 15 years are the offenders who committed more serious offenses and got longer sentences. Those who enter on a probation revocation, however, get out more quickly, presumably due to probation being given for less serious offenses. DATA NOTE: The source of these data is the National Corrections Reporting Program file #36373 available from ICPSR. These data are restricted; you have to obtain IRB approval and file a confidentiality plan with ICPSR to use them. The data come from state departments of corrections, so the original source of the data is what the Wisconsin DOC deposited with the NCRP. I exclude records in which a person has the same prison entry and exit dates in a record, as these typically mark transfers or shifts in custody status rather than true entries into and exits from prison. The public version of these data is ICPSR file # 36404. The variable ADMTYPE in that file distinguishes only new convictions (which includes all probation revocations as well) and parole revocations (which combines those with and without new sentences.) The TIMESRVD variable in that file has only large groups: <1 year, 1-2 years, 2-5 years, 5-10 years, 10+.  In that file (across all states and years), 51% serve less than 1 year.