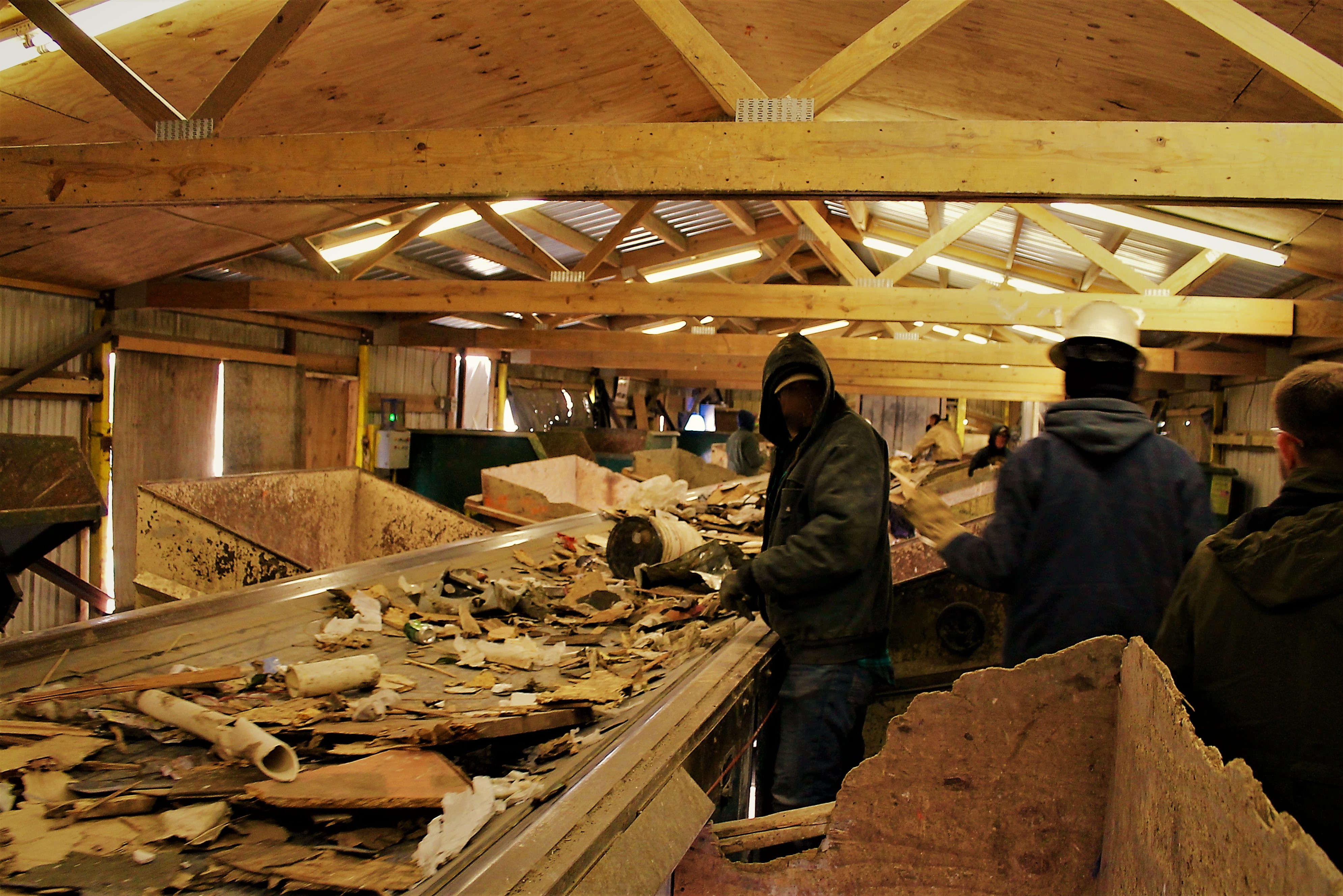 Stepping into the large warehouse, our boots sink half an inch into a milky-brown river of slippery sludge. Three 40-foot mountains of post-consumer waste tower overhead, waiting to be transferred by tractor to conveyor belt and ferried to pick-lines where workers will separate recyclables from trash by hand.

“We’ve seen live ammunition come through here. We’ve had a grenade.” The din of the machinery over the winter wind takes some getting used to; but even so, the recycling operations manager’s frustration is audible. “So, you know, imagine all these moving metal parts and something like that happening. We had a metering bin fire last week. That kind of stuff happens a lot because people are putting in crap that doesn’t belong here.” Crossing the shop floor, we ascend iron stairs to a maze of humming industrial machinery. Sirens and buzzers scream intermittently. A dozen workers in hooded sweatshirts stand over a conveyor belt, spiriting away nonrecyclable waste on its way to the shredders and grinders, lurching forward at the waist to retrieve, standing straight to discard. They do not look up from the belt as we approach to observe.

Recycling in the U.S. demands a vulnerable workforce. Because the industry is characterized by thin profit margins, unpredictable price cycles, and unpleasant labor that cannot be exported to the global south, recyclers need a workforce to perform in uncertain conditions without commensurate compensation. To loosen these constraints, recyclers turn to the temporary staffing industry.

Fifty miles north of the co-mingle recycling plant, we take seats in the strip-mall office building of a nationwide temporary staffing agency. Opposite us, a man in his early sixties folds his hands across a generous desk adorned with Harley Davidson memorabilia and family vacation photos.

Temporary workers exist in most sectors of the U.S. economy; however, contingency in recycling is unique. Recyclers rely on temps more than other industries to compensate for low profit margins and frequent workman’s comp claims due to on-the-job injuries.

“We have worked with [recycling firms]. I don’t do anything out there anymore,” the temp firm owner said. “The reason for that is my workman’s comp—the folks at risk management will not allow us. The reason is that they have a history of major injuries…and I’ll tell you why recycling is dangerous: it’s very unscripted work. You’re not handling materials that come to you in the same form all the time, and the danger of getting cut, of having something fall on you…the work itself is just so subject to injury that we just can’t do it.”

Recycling is labor-intensive work involving loud, heavy machinery, including semis, forklifts, conveyor belts, shredders and grinders—all of which threaten life and limb, especially if improperly serviced, lacking safety features, or operated by poorly trained workers. Dirty, hazardous materials come down the line, and workers handle these and breathe in airborne contaminants. Many workers experience long-term respiratory problems from breathing in dust and airborne contaminants and handling biological toxins. Routine exposure to airborne toxins can cause asthma, cancer, and nervous-system disorders. These occupational diseases are among the highest-ranking preventable causes of death for U.S. industrial workers.

Recyclers are more than twice as likely as other industrial workers to be injured on the job. The Bureau of Labor Statistics lists a fatality rate of 38.8 deaths per every 100,000 workers. Recycling is the fifth-most fatal industry between roofers (75/100,000) and steel workers (17/100,000). Such riskiness requires that recyclers innovate ways to reduce liability, leading them to staff their lines with temps.

At another Midwestern recycling firm, a company co-owner explained his reliance on temp firms for staffing: “The reason we use a temp agency service—we had two injuries, two accidents. We had one gentleman lose his foot. Then we had another major back claim, so we had a really hard time getting workman’s comp. We were uninsurable. So, we switched over to a temp agency service.” Following him through loud, dimly-lit warehouse, past a dozen line workers, we noticed that the co-owner was the only one wearing a hardhat, safety glasses, or earplugs.

“For a lot of people we employ there really aren’t better opportunities with lower requirements.” A recycling owner explained his strategy for recruiting especially vulnerable workers, emphasizing his willful ignorance of applicants’ criminal histories. “There’s probably twelve guys here today, I’d say maybe one of them has a driver’s license. Maybe. It’s not uncommon to have nobody here have a driver’s license. So, it’s a good opportunity for people who can’t do another job. We don’t check your history. You know? I don’t care if you have felonies. It’s a good spot.”

We exit the lofted navy-blue warehouse and descend wooden stairs to the recycling yard. The air is dusty from the dirt kicked up by tractors and semis. We cross the yard to a white trailer, the company conference room. We meet the firm’s other owner.

“If we have a problem, it’s not really a problem,” he says of his temps. “We get rid of them. That’s my favorite part about agency staffing. When we had full-time employees, we had some really hard incidents where we wanted to get rid of somebody. It was a nightmare. We had to go through attorneys and whatnot, had to be very, very careful, very, very cautious—I knew we were gonna get sued…but with agency staffing I can just say ‘you’re not coming to work.’ I don’t even have to tell you—I can tell agency staffing, ‘I don’t like this guy, he’s not coming back.’ I don’t have to worry about any retaliation for lettin’ a guy go because I can let them go for any reason that I want. There’s really no consequence. That’s the other really nice thing. I don’t like your sweatshirt? You’re gone.”

He goes on to explain how temp firms deal with workplace injury as one of their services: “If you have an injury, the first thing they do is—you’re dropping a drug test. And most of these guys can’t pass. So, if you have an injury, you can choose to lose your job and not be compensated for anything or deal with it and keep your job. So that covers them from giving the frivolous, ‘oh, I hurt my back.’ Okay, well, if you got drugs in your system you shouldn’t’ve worked, you shouldn’t’ve hurt your back, so it’s not covered.”

The recycling manager characterizes any injury while on drugs as frivolous. He also recognizes that most of his employees cannot pass a drug test.

“Most of the people here are alcoholics, drug background, crime,” he says. “Just got outta jail, goin’ to jail.”

Workers’ drug use only becomes relevant once injured. Temp agencies confirmed that drug testing was the standard response following workplace injury. This threat discourages temps from filing claims, thus reducing numbers of claims and keeping worker’s compensation cheaper for the staffing agency and their clients.

Temp agencies and recyclers co-construct the “temp mentality,” as one interviewee termed it, in which temporary workers are incompetent, unreliable, lazy, manipulative, and addicted.

“They work today, they get paid today. So come here, people who want to be paid today—your drug addicts, your alcoholics for whom it’s important to have cash in hand tonight,” a senior staffing consultant for a regional temp agency told us of her clients. “It’s usually more your unemployable people, people who are working the system in some regard.”

Temp agencies deploy the temp mentality to justify poor worker treatment. Management comes to believe workers desire insecure work and understand their own fungibility as advantageous. Temp agency and recycler management reproduce the temp mentality to dehumanize recycling temps and to regulate and control these workers through employment insecurity and the specter of the drug test.

“The worst experiences that I’ve had are with companies who look at the temporary workforce as second-class citizens,” the temp firm owner who refused to work with recyclers told us. “I shouldn’t use the term ‘slaves’ or ‘indentured servants,’ or whatever, but there are some clients that don’t treat their temporary workforce properly.”

Recycling is a case of perverse incentives where managers need easily-replaceable, vulnerable workers. This is partly because shop floor conditions drive regular turnover, disincentivizing management from investing in workers. Further, because injuries and illness are endemic in the industry, staffing the shop floor with vulnerable and quiescent drug users hedges powerfully against liability claims. As recommended in our recent research article, policies must address labor conditions in recycling. State legislatures, should, minimally, require temp agencies to inform workers of their rights, deal transparently with grievances and insurance claims, and agree to safety training and equipment provision standards. Such legislation should follow the lead of the Massachusetts Temporary Workers Right to Know Law and the Illinois Day and Temporary Labor Services Act but go further and include mechanisms for monitoring compliance with these laws.