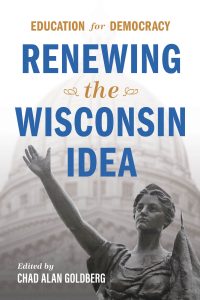 Education for Democracy: Renewing the Wisconsin Idea, edited by Chad Alan Goldberg and published by the University of Wisconsin Press in November 2020, is a collection of lively and highly readable essays based on the Wisconsin Idea public lecture series. The contributors revisit the Wisconsin Idea as it has developed since the early twentieth century, with deep concern about what it means today and what it can mean in the future.

While drawing on a wide range of perspectives from the arts, conservation biology, English, history, human ecology, journalism and mass communication, political science, and sociology, the essays are bound together by four overarching themes. One theme is the value of new knowledge and its potential to serve as a catalyst for good government. Another theme is the university’s outreach and service to the public. A third theme takes the form of an enduring question: who are the people the university should serve, and to whom is it responsible? A fourth theme concerns recent challenges to the Wisconsin Idea and the changing conditions that explain them.

Read together, the essays underscore the urgent need for a renewal of the Wisconsin Idea. This idea emerged in a particular time and place, but it has more general relevance because the problems it addressed are confined neither to Wisconsin nor to the past; it is a conception that has changed and developed since its beginning but has remained tied to the core principle of service to democracy; and it is a conception that has been severely undermined in the twenty-first century by forces hostile to it but for that very reason is more timely than ever.

We invite you to purchase the book or request a review or desk copy. All royalties generated by sales of the book are devoted to supporting the Wisconsin Idea public lecture series.