Lesley Bartlett is a Professor in the Department of Education Policy Studies at University of Wisconsin-Madison.
lbartlett2@wisc.edu| homepage

Tonya L. Brito is the Jefferson Burrus-Bascom Professor of Law at the University of Wisconsin Law School, where she also serves as Director of the Institute for Legal Studies. Professor Brito’s scholarship critically examines the intersection of family law and poverty law. She is the lead principal investigator of an NSF-funded study examining how the provision of counsel and more limited forms of legal assistance shapes access to justice for low-income civil litigants in child support enforcement proceedings. She also has written on welfare law and policy’s impact on the development of family law, the experience of poor families in the child support system, and the image of motherhood in poverty discourse. Professor Brito is a Faculty Affiliate with the Institute for Research on Poverty and serves on its executive committee. She is a recipient of both the University of Wisconsin-Madison’s 2012 Outstanding Women of Color in Education Award and the University of Wisconsin System’s 2012 Outstanding Women of Color in Education Award. Professor Brito’s professional service focuses on advancing the interests of poor children and their families. She serves on the boards of the Wisconsin Council on Children and Families and the Center for Family Policy and Practice. Professor Brito received her A.B with honors Barnard College and her J.D. cum laude from Harvard Law School. Prior to joining the UW faculty, Professor Brito was a judicial law clerk for Judge John Garrett Penn of the United States District Court for the District of Columbia, practiced complex litigation with the law firm of Wilmer, Cutler & Pickering in Washington, D.C., and served on the law faculty at Arizona State University College of Law.
tlbrito@wisc.edu | homepage | Curriculum Vitae

Katherine examines the intersection of gender and race in her research on the socio-economic consequences of migration. Specifically, she has examined occupational outcomes and migration patterns among participants of the historical Great Migration of southerners to the North and West. White is beginning a new project focusing on the socio-economic well-being of participants of the Return Migration between 1970 and 2000 and the southern communities to which they “returned.”
kcurtis@ssc.wisc.edu | homepage | Curriculum Vitae

Felix’s research focuses on the social demography of marriage, mortality, and statistical methods of causal inference for the social sciences. Elwert has recently completed work on interpersonal health effects, marital status and mortality, race and spatial differences in hospice use, intergenerational effects of social context, and causal inference from observational data. He has developed a new test for unobserved heterogeneity in the apparent effect of widowhood on mortality, which uses information on current and former spouses to identify the causal effect of marital status. The test exploits the selective presence and absence of social ties to understand the social transmission of mortality, and can be translated to different substantive areas of social demography.
felwert@ssc.wisc.edu | homepage | Curriculum Vitae 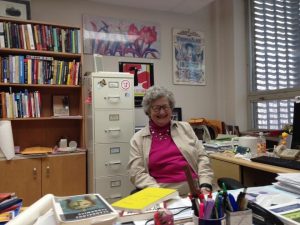 Myra Marx Ferree retired as the Alice H. Cook Professor of Sociology in 2019 but continues to be active in writing and in mentoring graduate students (and previous students). Her focus at present is on intersectionality at a macro-level as explaining the differential mobilizations of right wing and anti-democratic movements in the US and Europe (papers available on SocArXiv in open access form: https://osf.io/preprints/socarxiv/discover?q=Myra%20Marx%20Ferree). She has been working with Maria Azocar to theorize the macro-version of intersectionality as well, especially as a critique of social theory as a field of expertise dominated by a white Euro-American perspective. She is working on a comparison of German and US mask resistance movements, and on developing an understanding of gender regimes that connects demography and the economics more closely.

Joan teaches courses in social studies of science. Her Gender, Science, and Technology course examines different perspectives in the study of gender and science. Topics include the historical and contemporary studies of technoscientific and medical constructions of sex/gender differences; the impact of gender (and race) on scientific and biomedical productions; feminist critiques of scientific theories and methods; feminist proposals of new epistemologies; the work (and lack of work) of women in science; and recent theories and debates on feminist epistemologies.
fujimura@ssc.wisc.edu | homepage | Curriculum Vitae

Monica is Associate Professor of Sociology. She is a social demographer whose research focuses on gender inequalities in early life course transitions–primarily in Sub-Saharan Africa and South Asia, with a focus on how increasing educational attainment and the HIV/AIDS epidemic influence other domains of life during the transition to adulthood. Her recent research explores divorce in Sub-Saharan Africa.
grantm@ssc.wisc.edu | homepage | Curriculum Vitae

Chloe’s research agenda investigates the micro- and meso-level mechanisms that contribute to persistent gender inequalities in the contemporary United States. Methodologically, she uses in-depth interviews to capture how people encounter and make sense of gendered phenomena in their daily lives. In tandem with this qualitative approach, she employs survey experiments to isolate possible causal mechanisms that may promote inequalities, often drawing on insights gleaned from her interview data.

Jenny is a faculty member in Gender & Women’s Studies, and is affiliated with the Center for Demography and Ecology, Population Health Sciences, and the Department of Obsterics and Gynecology. Though her PhD is in women’s studies, she was trained in sociology as both a graduate and undergraduate student. She teaches GWS 103, or Women and Their Bodies in Health & Disease, which is (to our knowledge) the largest women’s health class in the country. She conducts mixed-methods research on sexuality and reproductive health — especially people’s use of condoms and other contraceptive methods. Research funders include the NIH, the National Campaign to Prevent Teenage and Unplanned Pregnancy, and the Woodrow Wilson/Johnson & Johnson Foundation. She serves on the board of directors for the Guttmacher Institute as well as the editorial board for both the Journal of Sex Research and Perspectives on Sexual & Reproductive Health.
jahiggins2@wisc.edu | homepage | Curriculum Vitae

Alfonso is an Assistant Professor of Urban and Regional Planning. He writes mostly about how marketplaces produce community economic development. In that regard he investigates the relationship between socio-legal environments and entrepreneurship, including women’s entrepreneurship. He has also written about women’s health along the U.S. Mexico Border, access to health care there, and the emotional consequences of nursing.
morales1@wisc.edu | homepage | Curriculum Vitae

Eunsil Oh (she/her) is Assistant Professor of Sociology and a feminist scholar working on the issues of gender, work, and family. She uses qualitative methods to examine how individuals arrive at their perceptions and make early decisions about work and family. Also, she is interested in the culture of overwork and in explaining social mobility from a feminist perspective. Her work has appeared in Gender & Society, American Journal of Sociology, and Current Opinion in Psychology.
eoh26@wisc.edu | homepage

Pamela is a professor of sociology at the University of Wisconsin who has published many articles and a book on collective action and social movements. Since 1999, she has devoted much of her time to analyzing and speaking about statistical patterns of racial disparity in criminal justice in Wisconsin and the nation. She has made over 100 public presentations on these issues and served on the Governor’s Commission to Reduce Racial Disparities in Criminal Justice in 2007-8. She is working on a book about the politics of incarceration and analyzing differences among US states and metro areas in their racial disparity patterns.
oliver@ssc.wisc.edu | homepage | Curriculum Vitae

Mary Lou specializes in Women and Gender, France, and the Second World War. Her most recent book concerns the politics of sex during the American presence in France during the Second World War. As the GIs conquered Normandy in the summer of 1944, they pursued their fantasies of having sex with French women. Such erotic contacts—including heterosexual sex, prostitution, and rape—became the focus of conflict and debate between the US military and French officials. As these debates occurred in newspapers and official correspondence, they anchored larger struggles for authority, including the breadth of American political power in Europe, and the moral role of the United States as a new global leader.
maryroberts@wisc.edu | homepage

Gay has done research on social movements — especially labor and women’s movements — in several different countries, including South Africa, Brazil, Zimbabwe and Guatemala. Among other work, she has written a series of articles about the South African women’s movement, and about how gender issues have been built into South Africa’s new democratic state.
seidman@ssc.wisc.edu | homepage | Curriculum Vitae

Christine studies the relationship between union formation and dissolution patterns and social inequality. In particular, she is interested in gendered patterns of partner selection and how changes in men’s and women’s education have affected marriage, cohabitation, and the dissolution of relationships. In addition, she is currently working on a project that compares partner selection among gay men, lesbians, and opposite-sex cohabitors and married couples.
cschwart@ssc.wisc.edu | homepage | Curriculum Vitae

Leanne approaches the area of gender from the vantage point of the labor market, asking questions about how men’s and women’s labor market experiences differ and how the restructuring of the economy is affecting men and women differently. She is also very interested in the difference that “place” makes in the gendered labor market. She concentrates on the US case but sees the same theoretical perspectives and research question as relevant for other societies, including those in the “developing” world.
lmtigges@facstaff.wisc.edu | homepage | Curriculum Vitae

Aili Mari Tripp is Professor of Political Science and Gender & Women’s Studies. Her research has focused on women and politics in Africa, women’s movements in Africa, transnational feminism, African politics (with particular reference to Uganda and Tanzania), and on the informal economy in Africa. Most recently she authored Museveni’s Uganda: Paradoxes of Power in a Hybrid Regime (2010).  She is co-author (with Isabel Casimiro, Joy Kwesiga, and Alice Mungwa) of African Women’s Movements: Transforming Political Landscapes (2009) and author of Women and Politics in Uganda (2000) and Changing the Rules: The Politics of Liberalization and the Urban Informal Economy in Tanzania(1997). She has edited Sub-Saharan Africa: The Greenwood Encyclopedia of Women’s Issues Worldwide (2003), and co-edited (with Myra Marx Ferree and Christina Ewig) Gender, Violence, and Human Security: Critical Feminist Perspectives (2013), (with Myra Marx Ferree) Global Feminism: Transnational Women’s Activism, Organizing, and Human Rights, (with Joy Kwesiga) The Women’s Movement in Uganda: History, Challenges and Prospects (2002) as well as (with Marja-Liisa Swantz) What Went Right in Tanzania? People’s Responses to Directed Development (1996). She is currently working on a book project on women’s rights in post-conflict countries. Tripp has been the recipient of numerous awards and honors, including the Victoria Schuck award of the American Political Science Association for the best book on women and politics.

The Sociology of Gender Brownbag (FemSem)

FemSem meets Thursdays from 12:30 - 2:00p virtually on the Canvas page for Fall 2020. FemSem is open to all. New students are encouraged to get involved early. For more information, email Emma Romell at romell@wisc.edu or any of the graduate students or faculty.

Join the FemSem email list for event announcements and information: